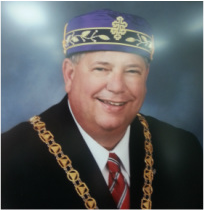 He is licensed to practice law in Tennessee and Georgia and has been admitted to the bar of the United States Supreme Court, the Sixth and Eleventh Circuit Courts of Appeal, and numerous federal district courts. He is a member and Past Master of Red Bank Lodge No. 717 in Chattanooga. He is Past Venerable Master of Chattanooga Lodge of Perfection, served as Chairman of the Advisory Conference of the Chattanooga Scottish Rite Bodies, and Personal Representative of the SGIG.

He is a member of the Ways and Means Committee of the Grand Lodge of Tennessee and is a Past Sovereign of the Red Cross of Constantine, a member of the York Rite Bodies, Alhambra Shrine, and numerous other Masonic Bodies. He is a Senior Demolay and served as Master Councilor of Red Bank Chapter and Scribe-Treasurer of the State of Tennessee.

Bro. Samples is married to the former Mitzi Poteat. They have two children, Lochlin B. Samples, 32° KCCH, and Kelsey A. Samples.