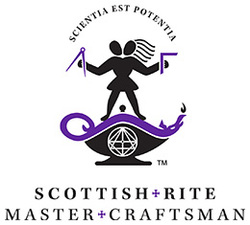 As a part of the Masonic Cooperative Education Program sponsored by the Scottish Rite Valley in Chattanooga, we are pleased to deliver this presentation on “The Square and Compasses.”

When most people are asked what comprises the “secrets” of Freemasonry, many would justifiably reply that the grips and words are the secrets of this fraternity.  However, the grips and words can be gotten by non-Masons through a brief search of the Internet. In a much more complete sense, Freemasonry can best be understood as a fraternity based on symbols, and it is perhaps the meaning of such symbols which compose the true “secrets” of Freemasonry.

In that regard, the square and compasses must be very important symbols to be afforded such elevated status in our fraternity.  Thinking about a square reveals that it is an instrument that can only be applied to flat surfaces.  In ancient times, the Earth was presumed to be flat, and so the square became a symbol of that which is earthly.

The compasses are used to describe circles and shapes in trigonometry and geometry that cannot be adequately described by a square.  Thinking for a moment, you will realize that the sky or heavens above constitute a half-sphere or half-circle which can be drawn by the compasses.  Thus, they came to signify the heavenly or spiritual.

Every human being has a dual nature.  One side of human nature involves the animal and material, while the other involves the intellectual and spiritual.  Man’s body is said to be formed from the dust of the Earth, while his soul, spirit, and intellect are formed in the heavens.  The physical body arises from the Earth and returns to the Earth and is considered animal and material.  The soul, spirit, and intellect are immortal and are heavenly and spiritual in nature.

There are competing forces affecting human conduct.  The compasses represent those which are heavenly and spiritual, while the square is a symbol of the earthly and material.

The compasses’ two arms represent man’s moral sense and reason.  Moral sense can be defined as that which has been given to man to discern right from wrong.  The concept of reason is one by which man decides the wisest and best course of conduct.

Alternatively, the square represents man's earthly, material nature and can be described as the sensual appetites and passions of a human being.  These characteristics man shares with animals, and so far as they rule a man, he is but an animal.

When a candidate is prepared for initiation, he represents man in the state of barbarism, ignorance, and subjugation.  You will recall that the candidate is neither naked nor clad, barefoot nor shod, meaning that his faculties are but half developed and that morality and reason, though they exist in him, are  dormant.

Furthermore, the candidate is hoodwinked and so symbolically deprived of the light of knowledge.

The candidate is also divested of all metals.  This was originally applied to the most precious metals of gold and silver and symbolized the deprivation of the light of reason and moral sense.  Going even further, gold originally represented the sun and silver the moon.  So, a blindfolded candidate divested of all metals is denied a vision of the light and vision of the sun and moon, in other words, deprived of the ability to discern morally or think rationally.

During the obligation, the candidate’s attention is drawn to the square and compasses on the altar.  Remembering that the two points of the compasses represent moral sense and reason and the two arms of the square represent sensual appetites and passions gives us great insight into the significant of these symbols.

With great care it is pointed out to the candidate that the two points of the compasses are under the square in the entered apprentice degree.  As the candidate is deprived of light, the candidate’s ability to distinguish right from wrong and think rationally are symbolically overpowered and ruled by his earthly appetites and passions represented by the square. Thus, without moral compass and rationality, man is destined to be no better than an animal and governed only by blind instinct.

In the Fellowcraft degree, one point of the compasses is elevated above the square, and this fact is specifically pointed out to the candidate.  Such teaches the candidate that by zealous work he can begin to attain light and that the progressive journey of a faithful man is from darkness to light.  In our teachings, the candidate is reminded that Freemasonry is a journey and can be attained only by degrees, the journey of a man traveling from ignorance to enlightenment and that of a man maturing from his animal instincts to a willingness to serve the greater good.  The Fellowcraft degree represents that the candidate's earthly appetites and passions no longer have complete control over his conduct.

The third degree is the keystone of the three, and as a Master Mason, the candidate is instructed that both points of the compasses are elevated above the square.  This teaches the candidate that he is expected to have developed his moral, intellectual, and spiritual forces so that they control his material and animal forces. It is the recognition that man owes a greater duty than just to himself and that the best expression of his nature is one of self-sacrifice and service to others.  Thus, as a Master Mason, his moral, intellectual, and spiritual forces  have become superior to his material and animal forces.   The candidate becomes a Master Mason because, symbolically, he has become a Master of himself.

We are all familiar with the phrase describing a Master Mason as one who has “passed from the square to the compasses.”  Knowing the meaning of the symbolism gives us much greater insight and a more complete understanding of this phrase.  As one “passes from the square to the compasses,” one is growing in maturity and evolving from the earthly and sensual appetites to those heavenly and spiritual virtues which are the ultimate rewards for those who seek the true light.

We are also taught that the principal tenants of Masonry are said to be included between the two points of the compasses. Likewise, the compasses are said to circumscribe our desires, which means that by  discerning morally and thinking rationally, we keep our sensual appetites and desires in check and make them subordinate to those higher and nobler virtues of service to God and our fellow man.

One of the great Masonic scholars of all times was Albert Pike, Sovereign Grand Commander of the Ancient and Accepted Scottish Rite of the Southern Jurisdiction from 1859 until his death in 1891.  He felt very strongly that symbolism was of critical importance in the Blue Lodges, and one of his goals was to help Masons understand the symbolic meanings and applications of the symbols in their Lodges.  Our ritual is what sets Masonry apart from other good and useful charitable and fraternal organizations.  Grand Commander Pike realized this and noted that the ceremonies of Freemasonry served two primary purposes: To inculcate and promote moral and social virtues; and To serve as a vehicle for transmitting symbols.

We would be well-served by undertaking a diligent study of Masonry’s symbols whereby we can obtain the true secrets and gifts that Masonry has to offer.